ICT goods declined in 2015 by 3.6 percent in current prices to just over $2 trillion

For the first time since 2009, the value of global imports of information and communications technology (ICT) goods declined in 2015 by 3.6 percent in current prices to just over $2 trillion (Chart 1).

Whereas the 2009 decline was connected to the 2008 global economic crisis, the 2015 slump came amid overall economic growth, and the appreciation of the US dollar.

However, imports of ICT goods declined significantly less than international trade as a whole. This dipped by 10% in 2015, on the back of a manifest fall in commodity prices and currency fluctuations.

Communications equipment was the only category of finished ICT goods that continued to record positive growth. Global imports of such equipment exceeded those of computers and peripherals for a second consecutive year.

In developing countries, the trend was even more pronounced. For every dollar’s worth of imported computers and peripherals, developing countries spent $1.5 on imported communication equipment.
This means that developing countries accounted for as much as 45% of global communications equipment imports in 2015 (Chart 2). This share has been steadily increasing since the launch of smartphones in 2007.
The decline in demand for PCs, laptops, tablets, storage units, parts and accessories accounts for as much as 65% of the overall decline in ICT goods imports in 2015. The 2015 decline can also be associated with meager prospects for consumer electronics equipment – such as TV cameras, radio receivers, digital cameras and projectors. Imports of such products had already been waning for the past five years. The 2015 global value of $182 billion is even below the 2005 level.

Mobile revolution
Much of the growth in imports of communication equipment to developing countries is associated with the “mobile revolution”, which has connected millions of people.
But the shift also benefited from reduced import prices both for handsets and for setting up and upgrading network equipment. As illustrated by data from two Least Developed Countries in Africa – Rwanda and Zambia – the rise in mobile subscriptions is closely correlated with imports of communication equipment (Charts 3 and 4).
Although mobile penetration in many developing economies leveled out after 2010–2011 as the market became saturated, communications equipment imports continue to grow as networks need upgrading and handsets become obsolete (Charts 5, 6, and 7).
The growth in China’s exports of communication equipment is also linked to better access to mobile phones and networks, not only in China but also in other importing countries. In China, domestic production plays a significant role in meeting the demand for mobile equipment. Imports also grew but at a much slower pace.
By contrast, Brazil, which was an exporter in the first half of the 2000s, has relied mostly on imports to sustain rising mobile subscription rates following the launch of the iPhone in 2007. In Mexico, sustained imports and exports played a role. Interestingly, back in the early 2000s both Mexico and Brazil were exporters of telecom equipment but mobile subscription rates in these countries were very low (Charts 8, 9 and 10).
Imports of intermediate ICT goods – electronic components – maintained their proportion of about one-third of the total. The lion’s share of intermediate ICT goods imports, more than 80%, continued to go to factories in developing countries, notably in Asia.
Europe and Japan, China’s main trade partners in ICT goods, saw a sharp drop in their US dollar-valued imports of ICT goods, of 7% and 13%, respectively (Chart 11), largely due to the depreciation of the euro and yen. This explained more than half of the 2015 decline in ICT goods imports.
Chinese imports of ICT goods accounted for nearly a third of the global total. However, a significant slowdown in demand from China, especially for finished ICT goods, affected production all over the world. After expanding at more than 15% annually between 2009 and 2013, Chinese imports dropped 4% in 2014 and saw growth of only 2% in 2015.
Faced with a situation of market adversity, a few economies reported remarkable increases in their exports of ICT goods in 2015, such as Viet Nam (+32%), the Philippines (+18%), Israel (+19%), Ireland (+10%) and Egypt (7%).
By contrast, transition economies, notably the Russian Federation, witnessed sharp declines in both imports and exports of ICT goods in 2015 with imports shrinking by 25% and exports down 37% for the region as a whole, mostly due to the depreciation of the Russian ruble.
Chart 1: Global imports of ICT goods, million USD 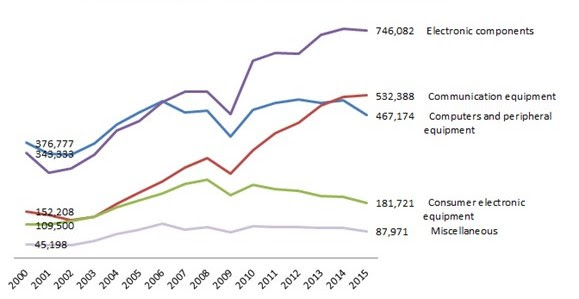 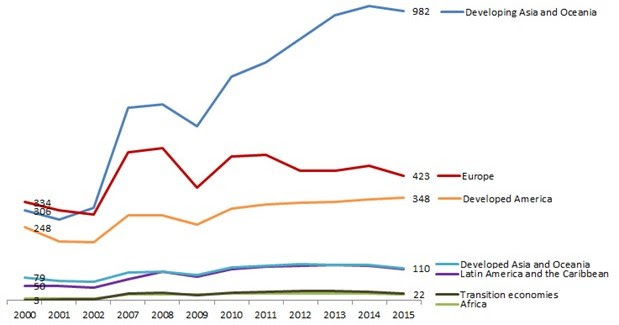