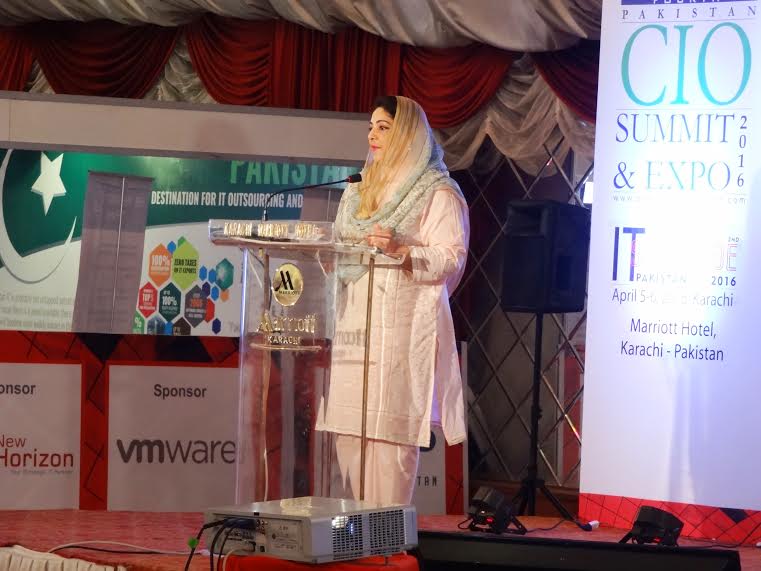 Public private partnership required to unleash true potential of IT sector: Minister IT

The 4th Pakistan CIO Summit was held at a local hotel in Karachi which was attended by CIOs and CEOs from ICT sector of Pakistan as well as government officials from Ministry of IT and Pakistan Software Export Board (PSEB). The summit started with speeches by various executives from the industry followed by a documentary on Pakistan’s IT industry produced by PSEB under the auspicies of MOIT. Speaking on the event, the chief guest, State Minister of IT, Mrs. Anusha Rehman Khan spoke about Ministry’s vision for IT which is to put in place an accelerated digitization ecosystem to enable socio-economic development, to expand knowledge-based economy, and to spur the economic growth. She said that IT is the fastest growing exports sector of Pakistan at present with a growth rate of over 41% during 2014-15. Pakistan is also in Upwork’s top 5 countries, the world’s largest freelancing network, in terms of freelancing revenue. She mentioned that the government is offering many incentives to investors in IT sector including zero taxes on exports, 100% repatriation of profits, 100% equity ownership, and 7-year tax holiday for venture capital funds. However, industry has to reciprocate and collaborate with the government on defining KPIs for the IT sector over the next 5 years such as  increase in remittances, foreign direct investment and employment generation. The Minister emphasized the importance of public private partnership (PPP) and invited the IT industry to provide its inputs in the IT policy of the federal government to ensure growth of IT industry. She said that it is optimal time for local industries to use local software to support our own IT industry. She focused on the concept of gender balance in the IT industry and mentioned that the ministry has kept a minimum percentage of 30% females in all industry support programs such as internships and trainings to motivate more females to join the IT workforce. She said that Pakistan’s IT industry is a rising tide but IT companies have to improve reporting of remittances to formal state bamk channels to reflect the true size of the IT industry.

The chief guest also visited stalls of different exhibitors at the event and emphasized that industry should play its role to aggregate figures to provide a better picture of Pakistan’s IT industry to the global world. The documentary was followed by a panel discussion on the changing face of telecommunications and evolving role of CIO. The session was moderated by Chief Digital Services Officer, PTCL and included panelists from Faysal bank, Standard Chartered, SSGC, Unilever Pakistan, Telenor, Sanofi Aventis, and Pak Suzuki Motors. The afternoon session included speeches from Deputy Governor State Bank, RapidCompute, and New Horizon. This was followed by a panel discussion on Cloud based services and business intelligence. Moderator for the session was CEO Jaffer Brothers. Panelists were from Redtone, Bank Alfalah, MCB, PSO, Mobilink, Atlas Honda, and Colgate Palmolive.