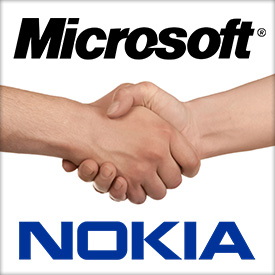 Nokia, once the world’s biggest maker of mobile phones, plans to start designing and licensing handsets again once an agreement with partner Microsoft allows it to in 2016, its chief executive told Germany’s Manager Magazin.

“We will look for suitable partners,” Rajeev Suri said in an interview published on Thursday. “Microsoft makes mobile phones. We would simply design them and then make the brand name available to license.”

Finland’s Nokia sold its phone business to Microsoft in 2014 after years of declining sales as it failed to keep up with innovations led by Apple’s iPhone.

But months later it launched a new brand-licensed tablet computer, produced under licence by Taiwanese contract manufacturer Foxconn, with an intention to follow up with more devices.

Many analysts expect Microsoft to write off all or part of the $7.2 billion it paid for Nokia’s handset unit, a deal that left Microsoft with a money-losing business and only 3 percent of the smartphone market.

Microsoft manager Stephen Elop, whom the US software giant installed as Nokia chief executive for a time, is now leaving Microsoft in a sign the company is turning away from the hardware devices business he headed and back to its core software business.

Nokia in April announced a 15.6 billion-euro ($17.8 billion) takeover of Alcatel-Lucent in a bid to boost the network equipment business that is now its mainstay.

It is also hiving off its mapping business, which has drawn interest from German premium carmakers BMW, Audi and Mercedes, as well as Silicon Valley and Chinese Internet and technology businesses.

Upon being asked whether there were any preferred bidders for the HERE high-definition maps business, Suri told the magazine, “Anybody who can improve the business in the long run is a good buyer.”