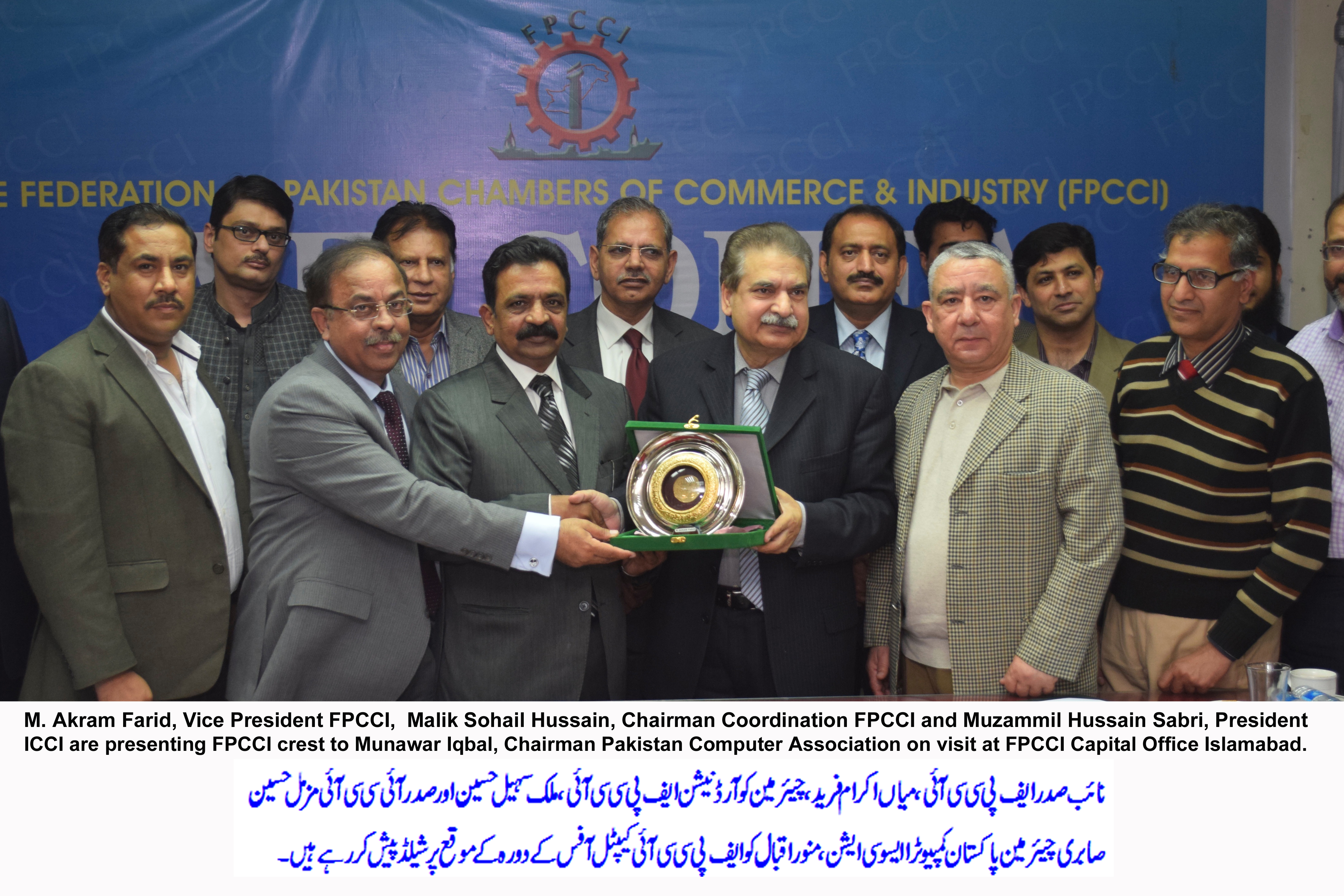 PCA Calls For United For IT Traders Community

A joint session of the delegation of the Pakistan Computer Association, Federation of Pakistan Chamber of Commerce & Industry (FPCCI) and Islamabad Chamber of Commerce and Industry (ICCI) after a meeting held in Islamabad on Thursday, called for a united platform to protect the interests of the IT business community in the country and those operating in Islamabad.  The meeting was held by Mr. Mian Akram Fareed,  Vice President FPCCI, Mr. Abdul Rauf, Chairman Founder Group, MR. Sohail Husain Malik, Chief Coordinator, Mr. Muzammil Sabri, President, ICCI and Mr. Munawar Iqbal Chairman of the PCA. The meeting focused at length on the issues facing the business community and the government’s apathy to listen to their demands and resolve their problems. They lamented that the government was unmoved by the woes and sufferings of  the business community due to the months-long Dharna and later by the disturbing Metro bus project which not only distorted the peaceful environment but also destroyed the business in Islamabad. They said that despite repeated calls through the electronic and print media their voice and concerns were totally ignored and the tax officials and the FBR instead of giving any relief to the taxpayers have continued to pressurize the business community with illegal enforcement of rules and regulations. Due to this difficult situation business of the blue area has come to a standstill and the vendors are feeling neglected and deserted by the government. They said it appears the government has adopted a policy of discrimination against the IT business community in the country.  Munawar Iqbal said that PCA is the sole nation-wide forum of the IT industry in Pakistan and is dedicated to save the businessmen from the adverse effects of discriminatory policies, rules and regulations that directly hinder the smooth running of the IT business in the country. He said the PCA will always keep close contact not only with its stakeholders, who form the backbone of the IT business, but also with the concerned GOP departments to apprise them of  the unwarranted situation due to their wrongful policies. He urged the government to provide a level-playing field and a business-friendly environment to the IT business community to help

them contribute their share in the national economy. He urged the formation of a joint platform and unified stand against all kinds of illegally enforced regulations including like taxation, SROs, GST, documentation procedure and other controversial regulations. He urged the government to provide incentives to the IT business community and also include their proposals in the next budget 2015-2016 to make it a more representative one. He called upon the government to immediately withdraw the controversial ‘PTA Type’  condition for import of Computer products by small vendors and follow the laws set by the Competition Commission of Pakistan (CCP) for ensuring a healthy business environment. He called upon the Ministry of Information Technology to formulate IT policy in consultation with the stakeholders and business forums and take them on board for the promotion of information technology.

Later, the members of PCA, FPCCI and ICCI presented shields to each other for their contribution towards the business community in the country.