By: admin
In: Telecom
Tagged: 11 million, CM PAK, Gray traffic, PTA
ISLAMABAD ( ABRAR MUSTAFA )
CM Pak Mobile alleging for illegally terminating international traffic‎ of 11 Million minutes into Pakistan (grey traffic). PTA has track this illegal activity of CM Pak Mobile by using grey monitoring system that LDIS have installed with investment of USD 30 Million under ICH policy directive. This Show cause is not issued to CM Pak LDI (LDI License of CM Pak). If found guilty, PTA can impose fine up to PKR 350 Million.
This show cause by PTA is one of its kind as in past no cellular operator ever alleged by PTA for illegally terminating international traffic into Pakistan using its Cellular license/network.
It is identified through Gray Traffic Monitoring System ( GTMS ) that in violation of the license, a total of around 2.2 million international calls accounting for around 11 million minutes were directly recived and terminated on nationwide Mobile number from 1st March to 4th September 2014 by using Voice over IP ( VOIP ) protocol : Session Initiation Protocol ( SIP ) through aforementioned IP addresses.
The mobile company failed on the part of the licenses in provision of the licenses services against the terms and condition of the licenses amounts to serious violation and contravention of the prevailing regulatory laws, directions of PTA and the terms and conditions of the licenses mentioned in show cause. The penal provisions prescribed under section 23 of the Act, i.e, to levy fine up to Rs. 350,000,000/- ( Rupees three hundred and fifty million ) or suspend or terminate the licence and/or impose additional condition by issuance of an enforcement order against the licensee under section 23 of the Act.
CM Pak terminated gray traffic during March to September 2014 butt PTA was sleeping this period. It is noticed by telecom sector that during contempt notice hearing in Sindh High Court the watch dog present show cause notice just to face saving. 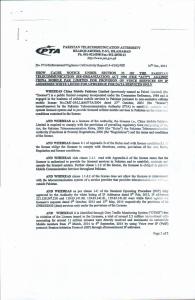 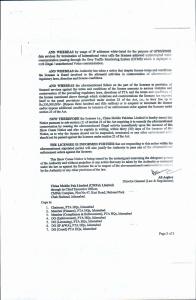