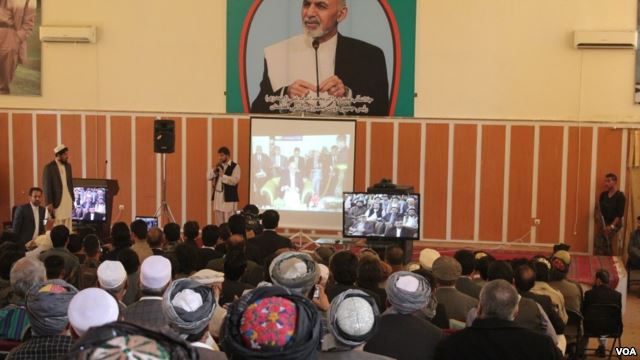 “The advent of new information technology has overcome one of the greatest constraints in human history — the ability to process large amounts of information and identify patterns … technology has become a mediator for a huge range of human relationships by creating new forms of organization for security and businesses,” Ghani wrote in Fixing Failed States: A Framework for Rebuilding a Fractured World, a 2008 book he co-authored with Clare Lockhart.

Now he’s attempting to put some of these ideas into action. Over the past few weeks, for example, Ghani has used Skype and Google Hangout to chair “town hall”-style meetings in Herat, Kandahar, Kunduz and Khost, where, via large monitors, he virtually engaged dozens of citizens.

Not without its technical flaws, Ghani’s video conferencing sessions represent a kind of communications benchmark that facilitates direct dialogue between the Afghan leader in his high-walled, high-security palace, and citizens in far-flung areas.

According to Ghani administration officials, the president plans to extend the practice to 33 provinces across Afghanistan.

In an informal talk with journalists in Kabul last month, Ghani said the use of free communications technology would not only streamline meeting schedules, but save the national treasury over US$2.5 million in presidential travel expenses alone. Security requirements make presidential travel within Afghanistan extremely expensive.

“It was an interesting experience,” said Ahmad Shah Ataal, who attended a video conference in Kandahar city on October 16.

“Although it was not anything near to a real meeting, a lot of people spoke to the president and he also talked and issued some orders,” he added, referring to a presidential directive to the governor of Kandahar, in which Ghani, via Skype, called for the re-arrest of a powerful drug trafficker who was set free extrajudicially.

The video-call technology was first brought to the Afghan Presidential Palace, the Arg, in 2002 by former Afghan President Hamid Karzai who used it primarily to communicate with the George W. Bush White House. Karzai, who stepped down in September, video-chatted less frequently with President Barack Obama. Ghani and his Chief Executive Officer Dr. Abdullah had their first video-call with President Obama on October 22.

Ghani has also used a secure video conference line to communicate with commanders of the Afghan National Army units in different parts of the country.

“Most of President Ghani’s exchange with provincial authorities via Skype and Google is available on public records so there is little concern about its security from hacking and surveillance,” said Mohammad H. Qayoumi, the Afghan-born president of San José State University.

“I’m sure national security and other confidential issues are not discussed on these free technology channels,” he added.

Despite Ghani’s history of advocating online communications technology, his office made an effort to emphasize the value he still places on face-to-face interaction, release footage of more than 20 meetings with delegates from around the country over the past month.

He also barged into a military hospital in Kabul a late evening and fired several doctors who were not on duty.

As Qayoumi put it, principal aspects of Afghan politics will always be the product of lengthy tea-drinking sessions that online communications platforms, no matter how sophisticated, cannot entirely replace.

In 2001, most Afghans had to travel to Pakistan to place international phone calls because the service was not available at home. In the past decade, more than $2 billion has been invested in Afghanistan’s telecommunication infrastructure and more than 90 percent of Afghans have access to mobile phones and some 30 percent have access to the internet, according to the Afghan Ministry of Telecommunication & Information Technology

Even Taliban insurgents, despite their utmost efforts to block development projects, benefit from the advancements, frequently communicating via mobile phones and online platforms such as Facebook and Twitter.