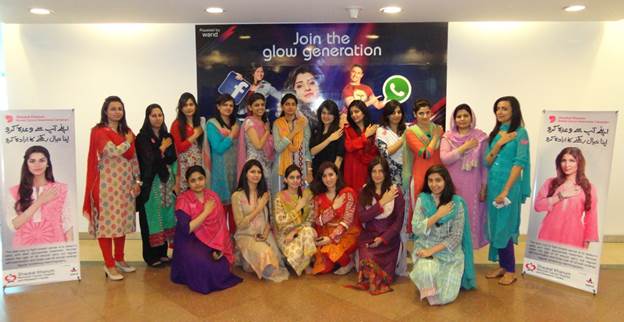 Warid has always shown strong dedication towards the wellbeing of society

Being a responsible corporate entity, Warid Telecom has always shown strong dedication towards the wellbeing of society. In-line with its Corporate Responsibility program, for many years Warid is supporting Think Pink campaign with Shaukat Khanum Memorial Cancer Hospital and Research Center.

Speaking on the collaborative effort between Warid and Shaukat Khanum Dr. Faisal Sultan, CEO Shaukat Khanum said: “Warid has been a constant support to this Breast Cancer cause by creating awareness and accumulating funds for the poor people who don’t have the finances to fund their treatment. Our partnership has helped us spread the Think Pink message more vastly. We are thankful to Warid for their consistent support. Around 70% of our donations come from such responsible organizations and individual support. Other corporations should use Warid as a benchmark and empower their CSR strategy and role for social welfare.”

Pakistan unfortunately has the highest rate of breast cancer for any Asian population in the world. It is the most frequent malignancy in women, where it accounts for 38.5pc of all female cancers. About half (43.7pc) of all breast cancers are locally advanced accounting to 40,000 deaths per year whereas limited information on breast cancer is available in Pakistan and cases of breast cancer are reported at a very advanced stage.

Battling cancer is one of the most devastating experiences for a woman and her family. At Shaukat Khanum Memorial Cancer Hospital and Research Centre, breast cancer continues to be the highest malignancy reported and is currently being treated over the years. Unfortunately, due to the lack of adequate healthcare facilities in Pakistan, this treatable disease is usually detected at advance stages when nothing can turn the course of the disease.

Doing its part earnestly by searching new and creative ways to help local community, Warid Telecom continues its mission to support Think Pink, SKMCH&RC campaign. As part of its emergency response program, there are a number of other recent corporate social efforts that Warid Telecom and its employees have made to support fellow Pakistani citizens in their time of distress. Company and its employees financially supported the IDPs of ongoing army operation and the recent flood victims in Pakistan in collaboration with Pakistan Army.