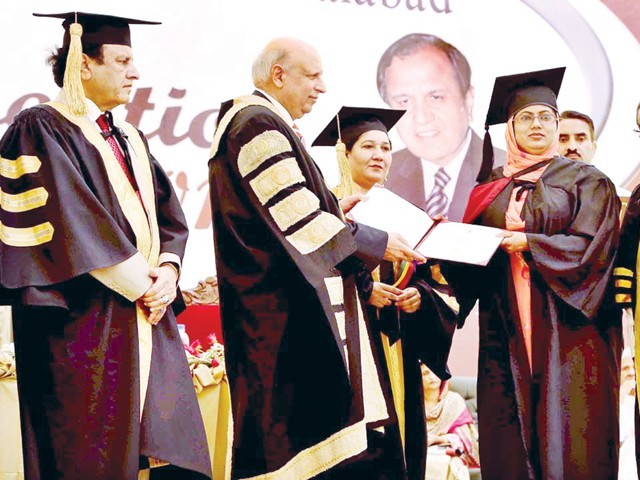 He was addressing the 5th annual convocation of Government College University Faisalabad (GCUF).

“The youth should work hard to prove their mettle,” the governor said.

Sarwar urged students to use their time for self-development through education. “The youth should stay away from anti-social elements and activities. Time is of utmost value. It does not wait for those who lag behind,” he said.

“I have been punctual and hardworking my entire life. The youth should never compromise over hard work,” the governor said.

“The nations that do not shirk hard work have attained high status in the world. It is a pity that some people having the advantage of higher education are unwilling to take up manual labour or practical work and wait for salaried jobs,” he said.

“The youth should come forward and play their role in promoting a soft image of the country abroad,” he said.

The governor assured the GCUF vice chancellor and faculty of his cooperation for the development and improvement of the university.

Vice Chancellor Zakir Hussain presented a Rs3.8 million cheque to the governor for the rehabilitation of the internally displaced people.

The governor praised the generosity of the GCUF staff and students.

He distributed degrees and medals among students who had passed with distinction.

Degrees were awarded to 6,306 graduates of the Faculty of Arts and Social Sciences, 316 of Faculty of Islamic and Oriental Learning, 1,067 of Faculty of Management and Administrative Sciences and 2,148 of Faculty of Science and Technology.

2014-09-30
Previous Post: 70th meeting of Board of Governors of Telecom Foundation
Next Post: Mobilink Foundation set up an ICT Lab at Secondary School and Girls College