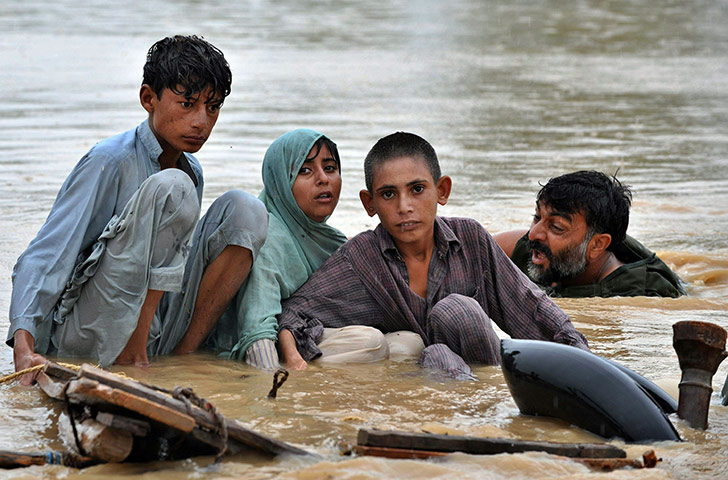 Best use of mobile technology to ensure relief for flood affectees

A district government in Punjab made the best use of mobile technology to ensure relief for affectees hit hard by heavy floods last month, said a senior official on Wednesday.

“We delivered foods and other necessities to around 18,000 flood affectees only by using low-cost smartphones,” Imran Sikandar Baloch, district coordination officer of Bahawalpur told The News over the phone.

It is not easy for relief and rehabilitation workers to track victims in the wake of an emergency when they flee everywhere to save their lives and belongings.

When this year floods raged to inundate everything on the way, people rushed to nearby bunds and dykes for safety. The superflood, as it is known, surged south swallowing thousands of villages.

An economist said the floods are likely to shear the GDP of Punjab – the largest province in the country – by 2.5 percentage points.

It was not easy for the government to mark the fleeing people and give them away at least daily meals, Baloch said.

A humanitarian team could not carry distribution as well as reconnaissance tasks simultaneously.

In Uch Sharif – a historical city of district Bahawalpur located near the confluence of Indus and Chenab rivers – people fled from their homes.

“We constituted three teams and sent them to different water-submerged areas over 40-kilometer embankments,” he said.

The objective is to coordinate with the government relief efforts based on the inspection data – different parameters – collected by the teams.

Upon reaching an affected family, the team registers numbers of people and animals and their residents on android application developed especially by the Punjab Urban Unit, an organisation working under provincial planning and development department.

The data along with an image and geo-coordinates on real time were sent to the district administration headquarter. Geo-coordinates enable the receiver to spot the actual location on heat map of the Google Earth that presents satellite imagery.

“This technology-led works helped the district government to distribute approximately 200,000 meals among the flood affectees,” said Baloch, whose Bahawalpur Service Delivery Unit won first prize of 65,000 pounds out of 196 entries from across the world in the Global Innovation Competition held at Nairobi, Kenya in April this year.

Under this model, civil servants were to be given smartphones with certain tasks and micro plans fed in them. They would collect geo-tagged data, for example, from the field while visiting for a vaccination campaign. They would send the data to a dashboard for real-time monitoring by administrators. The recipient of services was to be called for feedback of the delivered services. Besides, the information provided by a mobile phone and feedback were to be fed into heat maps visualising an extent of service delivery.
Today’s Newspaper
Top story National
World Business
Sports Karachi
Lahore Islamabad
Peshawar Editorial
Opinion Newspost