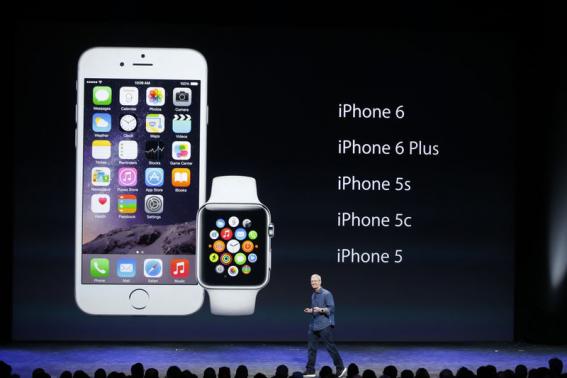 By: admin
In: International News
Tagged: 3 to 4 Weeks, customers, Iphone 6
NEW YORK ( MEDIA )Customers may have to wait three to four weeks to get their hands on Apple Incorporation’s iPhone 6 Plus, after a record number of orders for the company’s latest smartphones strained available supply. The new iPhone 6 goes on sale on September 19 in the US but the company began taking online orders on Thursday.

While the larger 5.5-inch “Plus” models now display a wait time of up to a month, the 4.7-inch version remains available for delivery, Apple’s website showed.

Verizon Wireless, AT&T and Sprint Corp, also showed shipment delays of up to six weeks on their respective websites. Apple said the pace of orders has so far outstripped any of its previous iPhones.

“Response to iPhone 6 and iPhone 6 Plus has been incredible, with a record number of pre-orders overnight. Pre-orders are currently available online or through the Apple Store App,” said spokeswoman Trudy Muller.

Apple routinely grapples with iPhone supply constraints, particularly in years that involve a smartphone re-design. The latest iPhones come with larger screens and some analysts had anticipated that production issues may keep a lid on initial runs. Its suppliers had scrambled to get enough screens ready because the need to redesign a key component had disrupted panel production, said supply chain sources last month.

It was unclear whether the hiccup could limit the number of phones available to consumers, the sources said at the time. Apple declined to comment on supply chain issues. In addition, Chinese customers may also have to wait until the year-end before they can buy the iPhone 6.

Apple is yet to set a release date for China, the world’s biggest smartphone market. The company unveiled its latest iPhones along with a watch and a mobile payments service on Tuesday. AT&T’s chief executive of mobile and business, Ralph de la Vega, told investors at a conference in New York that iPhone 6 orders have so far surpassed orders last year and the year before.

Meanwhile, wealthy mainland Chinese looking to buy the new iPhone 6 next week could expect to pay an eye-watering $2,500 for the handsets in Hong Kong, following Apple’s decision to delay the launch in China.

Hong Kong has long been a hub for resold and refurbished phones, and delighted vendors there were coping with a flood of pre-orders from the Apple-obsessed mainland.

The price, say sellers in the southern Chinese city, is a bargain – the phones can then be resold on the mainland, where fans could pay up to $5,000 for a new handset.

Massive queues and frantic trading were seen outside Apple stores in the southern Chinese city on previous iPhone launches, with resellers buying units from hundreds of new iPhone owners to sell on later at inflated prices on the legal but unauthorised “grey market”.