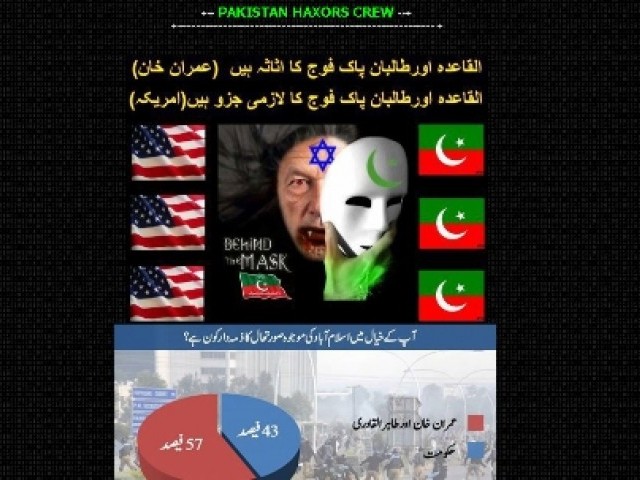 ‘Behind the mask’: PTI website defaced as hackings continue

After a week long campaign against government websites, having hacked and defaced over two dozen state sites and sub-domains, hackers shifted their cyber-front against the Pakistan Tehreek-e-Insaf (PTI).

On Sunday, PTI’s website fundyourtsunami.com was hacked and defaced.

PTI chairperson Imran Khan’s face was defaced resembling that of a vampire with the Star of David tattooed on his forehead and holding a mask with Pakistan’s crescent and star stamped on it, captioned “behind the mask.”

The hacking team of Pakistan Haxors Crew claimed responsibility for the cyber attack, warning that their fight is not against any individual but the system as a whole.

Last night, hackers defaced the website of Interior Ministry, featuring a short message for Interior Minister Chaudhry Nisar Ali Khan that claimed “his hair was as fake as the May 2013 elections”.

The hacking  follows a week of hacking and distributed denial of service (DDoS) attacks on a number of government and military websites by hactivists who identified with the hacking group anonymous and the hacking team of Pakistan Haxors Crew. Some media websites were also targeted.

They, however, during the week, had apologised for targeting military websites, noting that it was done in error.

Hackers, who identify themselves with the hacktivist group Anonymous, claimed to have acted against 31 websites of the government in response to the violence against protesters.

“We are cataloguing the atrocities being committed in Pakistan. We will begin at once assisting the peaceful protesters in Pakistan with every tool and tactic at our disposal. And we will initiate the process of removing every vestige of the Pakistan government from the Internet and shutting down their communications network,” the group claimed in its press release.

2014-09-10
Previous Post: PTCL commits to restore services in flood affected areas
Next Post: Ufone introduces the all in one ‘Ufone Super Card’