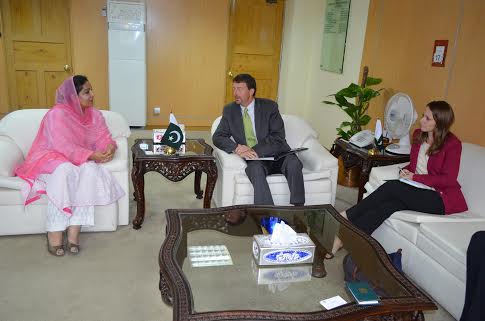 Commercial Counselor of US Embassy called on Mrs. Anusha Rahman

During an interactive session, the Minister apprised the US Commercial Counselor regarding achievement and ongoing plans of Ministry of IT. She said that after successful action of 3G/4G, we are working on other challenges. We are going to establish 500 telecentres  in rural areas of Pakistan to facilitate the poor people of un-served and underserved areas through Universal Service Fund with  the collaboration, of teleco’s in a  public private partnership with in next two to three years.

These telecentres would provide basic E-services to the people of for Flung areas including registration of birth and death, bio metric verification of Sims and ID cards through NADRA. We are also planning to establish facilitation for students of Virtual University in these telecentres, who otherwise, don’t have resources, could benefit through E-learning facilities. These telecentres would also generate local employment opportunities.

The Minister further shared that we have re-activated and appointed permanent MD. Purely on the basis of merit who has vast experience.  The Minister stated that we want to enhance the volume of IT export. We are also working on ISO certification programme for IT companies.

While discussing E-office replication program   Minister said that Ministry of IT is vigorously pursuing E-office replication plan to create less paper environment in all Federal Ministries. Initially six Ministries/Divisions including PM office, National Assembly, Senate and Ministry of IT have been connected through E-office system and intranet connectivity of all Federal Ministries has been installed.

Our Govt believes in working in collaboration and cooperation in order to reap optimum potential. Pakistan IT industry is full of vibrant and talented professionals whose talent is available for both domestic and international markets

US Commercial Counselor appreciated the initiatives being taken by Minister of IT to make this sector more productive and vibrant. He showed interest in mutual IT sector of the both countries.

He also informed the Minister that Ambassador Oslan will lead a trade delegation of IT companies of Pakistan to US in near future. This delegation will interact with US IT sector and would learn from each other experiences and to foster the trade ties between the two countries.

2014-07-18
Previous Post: Establishment of E-commerce gateway would further boast the confidence of the consumers. Anusha
Next Post: Illegal gateway seized in Lahore