Properly consult all LDI onboard before fixing ASR. LDI demands

Long Distance International operators asked the Pakistan Telecommunication Authority (PTA) to properly consult and take all LDIs onboard before fixing the approved settlement rate (ASR) after the termination of the International Clearing House (ICH), an official document revealed.

According to the meeting minutes, the Chairman PTA chaired the meeting while almost every LDI representative attended in which PTA asked them to suggest their recommendation on revised ICH policy and ASR.

The small LDI representatives sought sufficient time for the implementation of the new policy and ASR till March 2015 for reopening of their operation with clear policy on over-the-top (OTT). The PTA and ministry of information and technology did not consult them before the policy revision, they said.

They apprehended that sudden termination of the ICH policy might stuck their amounts in the pipelines under the business through the ICH. They also argued that how the ASR would stabilise under the new policy and what would be the model under revised ICH policy. Will wholesale international transit traffic be allowed or not under the revised ICH policy and ASR, they asked the PTA.

They were of the view that the disruptive change was not good for business at all in Pakistan and the sudden termination of the ICH and ASR would cause death of standalone LDIs as they would face huge difficulties to reconnect. Besides, the cost of doing business will go very high, which will be uncompetitive as compared to major LDIs of cellular operators and fixed line telephony companies.

The CEO of PTCL Waleed Arshad, in his observation, stressed the need of thorough consultation before the change in the ICH policy.

ASR has been fluctuating heavily, he said. Thus, now it should be completely deregulated, he suggested while there should not be any intervention from the PTA in the International Termination Rates, it should also be fully deregulated. 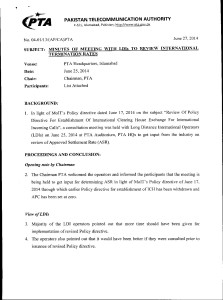 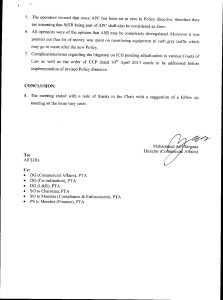 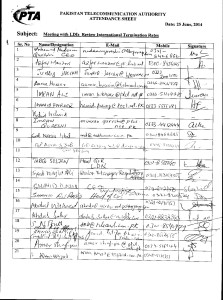 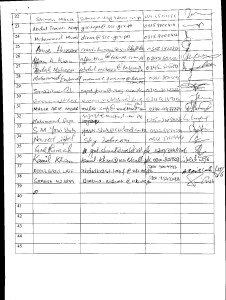