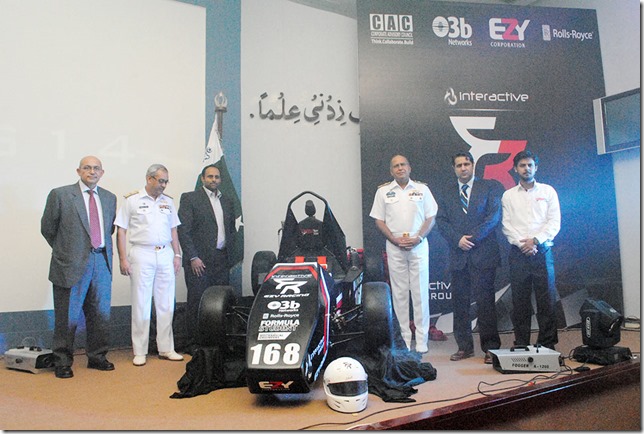 Students of Mechanical Engineering Department of the National University of Science and Technology (NUST), along Pakistan’s leading IT and technology enabling company, Interactive Group yesterday unveiled a locally manufactured single seater race car at a ceremony.

The Interactive EZY Racing Formula NUST Car will participate in formula student motorsport competition to be held at Silverstone, UK.

Commenting on the launch of the sports car by students of NUST, the Chief Guest, Chairman of the Interactive Group, Shahid Mahmud said “I am extremely excited about the launch of a locally manufactured sports car that will compete at an international circuit and will help build a soft image of the country in the world”.

According to him, The 29 member students of NUST that designed the sports car deserved all the credit. “We will support the students of NUST by taking the car to all the major cities of the country and showcase the hard work of these students that have brought pride to the nation”. He announced,

Shafraz Hamzadeen, CEO of EZY racing Srilanka, also announced that the internationally acclaimed drivers of EZY Racing Sri Lanka would immediately start the training of the students to perform at the international grand formula student championship.

EZY Racing, a subsidiary of Singapore Based EZY Corporation, started their journey in Sri Lanka by becoming the country’s first (and to date only) professional Motor Racing Company in 2010.

EZY Racing who initially set about with a Vision to be the very first Sri Lankan based Motor Racing Company to successfully compete in the International Motor Racing Arena, have firmly set their sights in making this Vision a reality in 2014 by becoming Sri Lanka’s first motor racing company to achieve this coveted feat.

Interactive Group is the leading IT services provider in Pakistan, United Arab Emirates and Saudi Arabia and provides a vast portfolio of products and services in the IT domain to the public and corporate sectors in the region.