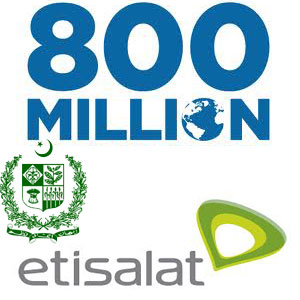 By: admin
In: Telecom
Tagged: Etisalat, Ishaq dar, US$ 800 Million

Government of Pakistan has made all possible efforts to recover $800 million from Etisalat against the partial sale of PTCL in 2005-06, but all attempts, incentives or even threats remained unfruitful.

The government is struggling for this badly needed $800 million for over five years now, but Etisalat is stand still on its day-one stance since the dispute surfaced in early 2009.

Ishaq Dar, Finance Minister, was yesterday quoted by Reuters as saying that dispute is finally nearing its conclusion.

“The release of funds is expected shortly”, Dar told Reuters — a statement that we have heard over and over again during past few years.

Payment dispute between Etisalat and Government of Pakistan roots back to 3,248 properties that Pakistan had to transfer to PTCL under the sale purchase agreement.

Etisalat was maintaining that Pakistan must transfer these properties before its $800 million are released.

While majority of properties have been transferred, PTCL is still to gain the possession of 31 properties, but these are unlikely to ever be transferred due to various reasons including legal impediments.

Etisalat, on the other hands, is rigidly committed to hold the payment till all properties are transferred to PTCL, something – as mentioned above – that is not possible at all due to legal limitations.

Pakistan has repeatedly offered Etisalat to deduct the value of disputed properties and clear the remaining dues, but nothing has changed the situation.