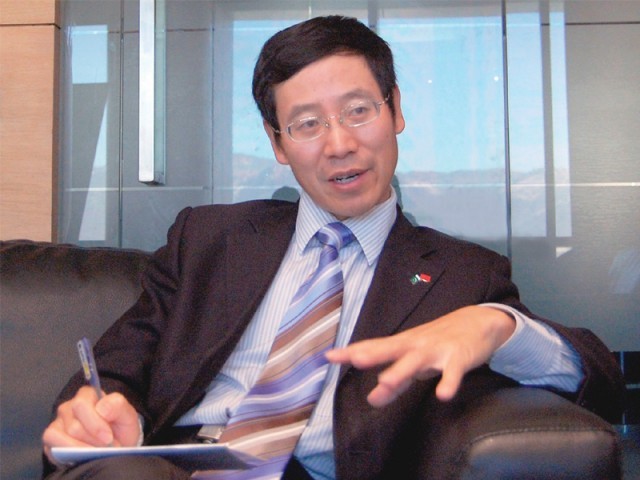 3G/4G This is begining of new era in mobile internet. Dr Fan

Dr. Fan Yunjun through such endeavors we show our commitment towards taking the telecom services in Pakistan to the next generation.”  This is the beginning of a new era in mobile internet which will allow us to experience extremely fast download speeds. He was explaining Zong plan for 3G/4G rollout.

In a bid to honor its esteemed subscribers, ZonG, Pakistan’s fastest growing telecom network has achieved yet another milestone. The company recently won the much anticipated Spectrum Auction for Next Generation Mobile Services to become the only 3G & 4G operator in Pakistan. Thriving on this success the company will soon offer a complete new array of first of its kind services to its distinguished customers.

ZonG’s parent company, China Mobile Communications Corporation (CMCC) officially launched its 4G services in December 2013. By March 31st 2014 the company had 781.08 million total customers making it the largest operator across the globe. CMCC’s successes speak for itself, today it has 2.79 million 4G customers & almost 225 million 3G subscribers. Till date CMCC has more than 252,000 4G sites across China and is targeting more than 500,000 4G sites by end of this year which makes CMCC the largest 4G operator in the world. At the same time, CMCC is also a giant within the handset distribution channel of over 200 million handsets sold to end customers on a yearly basis, out of which 50% are 4G handsets.

Expressing his delight on this occasion, Dr. Fan Yunjun, Chairman and Chief Executive Officer, ZonG said, “I would like to congratulate the Government of Pakistan & PTA for making the bidding process extremely transparent and fair, and also acknowledgethe entire ZonG team who is now a part of history, as their hard work and determination has finally paid off. China has a long term commitment to people of Pakistan and Zong is committed to service excellence and believes in bringing the best technology with the virtue of the world’s largest 3G and 4G operator.” This is a moment of pride as the consumer will now have access to the most advanced telecom technology and this is our chance to prove ourselves as the “Indispensable Digital Life Partner for Life” for every Pakistani.

Adding to the above statement, Dr. Zhao Peng, Chief Commercial Officer, ZonG said,“We believe in continuous progress and innovation, which in turn means better services and facility for our esteemed customers. This agreement with PTA for the 3G & 4G licenses is just another example of our dedication towards providing better and efficient services to our subscribers. Through such endeavors we show our commitment towards taking the telecom services in Pakistan to the next generation.”  This is the beginning of a new era in mobile internet which will allow us to experience extremely fast download speeds. The company has been taking giant leaps in the competitive market of telecom services by introducing customer centric services for different segments of mobile phone users along with expanding its network at an exponential rate. As the fastest growing cellular company in the industry, ZonG remains the telecom operator of choice in Pakistan.