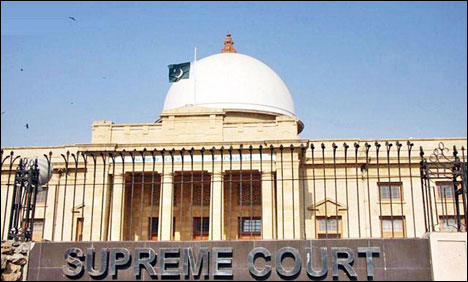 During Friday’s hearing of the Karachi suo motu judgment case, the Supreme Court ordered the formation of a joint task force to curtail the use of illegal SIMs, Media reported.

The order was issued by a five-member bench headed by Chief Justice Iftikhar Muhammad Chaudhry after the Pakistan Telecommunication Authority presented its report before the apex court during the case’s hearing at the Supreme Court’s Karachi registry.

Earlier on Thursday, the bench had directed PTA chairman Ismail Shah to submit a blueprint outlining proposed measures to stop grey trafficking and use of unauthorised SIMs by criminals to commit crimes. The court had ordered the PTA chief to prepare a comprehensive report after holding a meeting with representatives of cellular companies and police officials.

Today, the PTA also presented its recommendation to the bench on approaches that can be taken to rein in the use of illegal SIMs. One of the recommendations was that import of mobile phone sets would not be allowed without IMEI (International Mobile Equipment Identity) numbers. Another recommendation stated that within the period of one day, no more than two SIMs would be operable through a mobile phone.

The court after listening to the recommendations ordered that a joint task force be formed to check the use of illegal SIMs. Headed by chairman, the force is to have representatives from all provinces and would comprise of officials from the police, Nadra, intelligence agencies and the Federal Board of Revenue (FBR). It would prepare a list of recommendations and present a report to the apex court within three weeks’ time.

On Thursday The Supreme Court directed the Pakistan Telecommunication Authority (PTA) chairman to submit a blueprint of measures to stop ‘grey trafficking’ and use of unauthorised SIMs by criminals in Karachi.

A five-judge bench, headed by Chief Justice Iftikhar Muhammad Chaudhry, was seized with the hearing of Karachi law and order implementation case at the Karachi registry.

The chief justice observed that mobile phone SIM cards of different telecom companies were being sold in open market in unauthorised way, which facilitated the accused involved in heinous crimes including extortion and kidnapping for ransom.

The PTA chairman told the court that one of the cellular companies was going to inaugurate biometric system by which SIMs would be issued only after Nadra verification.

Counsel representing cellular companies submitted that SOP and other directives were issued with regard to registration of SIMs, adding that a large number of unregistered SIMs have also been blocked following those directives.

Additional IG Police Shahid Hayat informed the bench that about 3,000 activated SIMs were seized by the police along with China originated smuggled activation machines. He said that unregistered SIMs were being issued which were used mainly in extortion and kidnapping for ransom cases.

The bench observed that current registration system was deficient and required to be revised.

The chief justice remarked that if stringent laws regarding registration of SIMs were followed and issued after verification by Nadra, the crime rate would have declined by 50 per cent.

The five-judge bench also expressed its concern over grey trafficking causing loss to the economy of the country. The PTA chief told the judges that issue of grey trafficking had increased due to duty being charged on international calls.