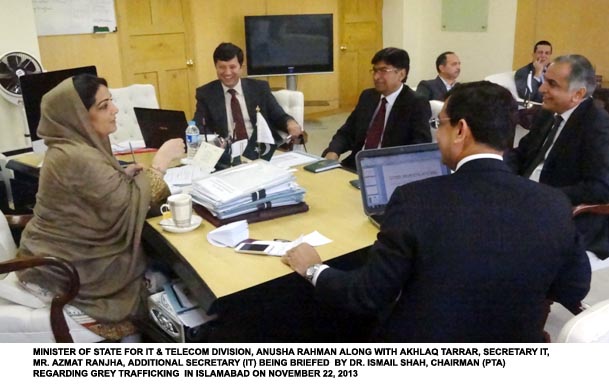 Chairing a review meeting of Grey Trafficking Monitoring attended by Dr. Ismail Shah, Chairman, PTA, Mr. Akhlaq A. Tarrar, Secretary IT, Mr. Azmat Ranjha, Additional Secretary IT, Ms. Anusha Rahman, State Minister for IT & telecom directed that all companies authorized to bring international incoming calls to Pakistan be advised accordingly to get their IP addresses white listed by contacting PTA immediately since White listing of IP addresses is required to authorize users/companies to use the services without any interruption.

The Minister of State further instructed If IP addresses were not reported to PTA for white listing as per the prescribed procedure, they should be blocked without any further notice: Moreover legal action should also be initiated against the companies involved in use of IP addresses for termination of any sort of illegal international incoming calls as per provision of laws of Pakistan.

During the meeting the Chairman, PTA informed that the newly deployed Grey Traffic Monitoring System, which started monitoring International Internet Protocol (IP) bandwidth to detect and block illegal International incoming voice calls have blocked some 42,000 IP addresses out of some 51,000 being used for this purpose by PTA in the past years.

In this context, all IP addresses which are not registered with PTA would be considered as black listed IPs and shall be blocked with immediate effect: IP addresses of authorized telecom users like International Clearing House (ICH), Call Centers and Video Conferencing etc. are being white listed in the monitoring system.

It is to be mentioned here that Government of Pakistan in its continuous efforts against blocking grey traffic, PTA with the help of FIA, has confiscated 711 Illegal Gateways during 112 raids. To curb down the menace of illegal traffic, with the efforts of Ministry of IT, Grey Traffic Monitoring System (GMTS) was installed in October 2013. The grey monitoring system, operational since early October 2013, has the capability to automatically block those IPs which are not in the PTA’s white list.