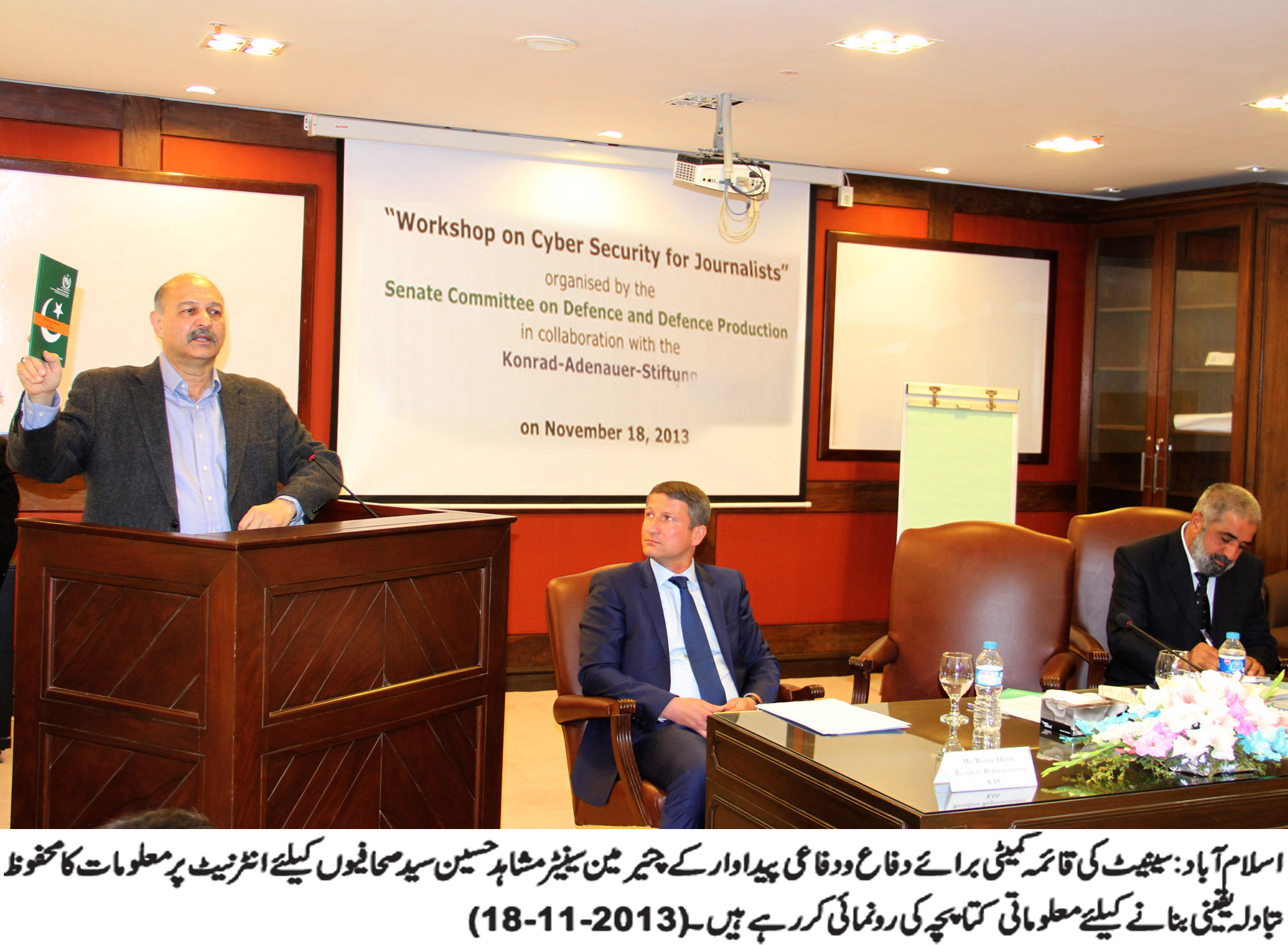 Senator Mushahid Hussain, while addressing the participants of Workshop on Cyber Security for Journalists, also emphasized that SAARC countries need a treaty to prevent cyber warfare against each other.  He was of the view that SAARC countries particularly India and Pakistan should avoid opening a new front that would be debilitating for the whole region.

“If Pakistan and India can have an agreement not to attack nuclear installations, why not an agreement seeking the prevention of cyber warfare against each other?” The senator asked.

The 40 page manual, in which the participants took great interest, provides journalists with basic know-how on security protocols for dealing with the threats that are becoming complex with the passage of time. The manual would enable the journalists to safely produce and share the stories with their audiences thus furthering the goal of press freedom.

Senator Mushahid Hussain reiterated his resolve that the Senate Defence Committee would act as a bridge not only between the Khaki and Mufti but also between media and military. He said that the new emerging scenario demands a proactive approach to tackle challenges and work for a strong defence of the country. He said that the committee would conduct such orientations in future as well to create awareness about issues related to defence and security.

He called for recognizing Cyber Security as a major non-conventional threat to national security that needed to be encountered through a sound strategy.

Defence Committee Chairman called for greater preparedness of the armed forces for protecting the digital frontiers of the country and said that he would recommend to the government and military leadership to establish an Inter-Services Cyber Security Command under the Joint Chiefs of Staff Committee.

Senator Mushahid said individual efforts were being made by different institutions to bolster country’s Cyber Security. He said all institutions needed to join hands for a comprehensive strategy to counter Cyber threats.

“With this media training workshop, we have gone step further by actively involving the media as not just stakeholders but as a partner in our endeavour on Cyber Security because media would always be the first line of defence in this battle,” Chairman Senate Defence Committee said.

Resident Representative Konrad Adenauer Stiftung Ronny Heine said journalists needed to equip themselves with the resources to protect themselves from Cyber threats.

At the day long workshop, that was divided into three sessions, the journalists learnt about the basic skills for dealing with the threats they face while working on the internet or using digital devices. Cyber security experts including Dr. Shoaib A. Khan and Talha Habib highlighted various critical areas posing threats to cyber security.

The journalists were told about the risks of interception of their communications, the dangers of working on unsecured internet networks and the threats to their systems and data while working in hostile environment. The training workshop was attended by about 50 senior journalists from the national media.