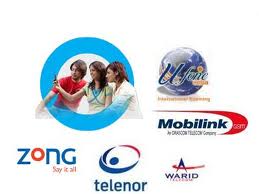 Pakistan Telecommunication Authority received 33,310 consumer complaints against mobile operators,  PTCL,  LDIs, WLL, ISPs  and  MNP.  Percentage of total complaints during FY2012 against  each  service.    Since mobile subscribers  make up  most of  the total  telecom  subscriber  base  (120 million),  71%  of  the  received  complaints pertain  to  the  CMOs.  PTCL constitutes 27% of the total complaints while its  total subscriber  base  is  about  3.7  million. A  deeper   analysis  of the  cellular CMOs 71% PTCL 27% ISPs 1% WLL 1% LDIs 0%  complaints  reveal  that  out  of  the  23,694 complaints  received  against  mobile services and  Mobile  Number  Portability  (MNP),  43.5%  were  related  to  misuse  of mobile services followed by MNP (20.4%). Although  the  uptake  of  cellular  mobile services  has  profound  benefits  for the country,  the  low  literacy  rate  and  some mischievous  elements  trouble the customers  with  wrong  calls,  obnoxious and  unwanted  communication .

Therefore, this category has the highest rate (43.5%) of complaints in the cellular sector. Illegal practices constitute 17.3% of the complaints while billing, QoS, VAS, poor customer issues were about illegal practices and others form the rest. Looking at the complaints received against each cellular operator, the maximum number (6,352) were against Mobilink since it has the highest subscriber base, followed  by Telenor, Ufone,  Warid  and  CMPak  with  4881, 4692,   3216  and  2491  complaints,respectively.  The  number  of  complaints against cellular operators is far less than the  subscriber  base  of  the  companies which  is  a  good  sign  for  the  sector. According to  the  share  of each  operator in total complaints received  by  the Authority, Mobilink had  the  highest  (29%followed by Telenor 23%. Ufone had 22% share while Warid had 15% share in the total complaints followed by 11% against CMPak.

PTA  successfully  redressed  99% of  total  received  complaints  against mobile  operators PTA has established  an  easy  and  reliable complaint  management  system  at  its headquarters  so  that  consumers  can  lodge complaints via phone, fax,  email, website and  personal  visits.  When  received,  the complaint  is  immediately  taken  up  with Analysis  of  Consumer  Complaints t h e   concerned operator and the complainant  is  kept  in  loop  throughout  till  the  effective  resolution  of  the  problem. Each year ,  the  Author ity  receives thousands of complaints against cellular, fixed line, wireless, broadband, LDIs and other licensed operators. On the basis of these complaints, the Authority regularly updates its regulatory framework and explores areas of improvement.