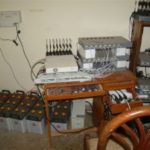 After a ruling party Senator Faisal Raza Abedi hurled accusations at the Federal Investigation Agency (FIA) for being involved in grey traffic and involvement of senior officials of Ministry of IT in hushing up Rs 4 billion scam at the Universal Service Fund, the Senate Standing Committee on IT and Telecom formed a sub committee to look into massive irregularities.

Senator Idrees Khan Safi chaired the meeting of the committee which expressed deep concern over the performance of MoIT and PTA. Senators demanded investigations as it appeared that MoIT and PTA official were involved with the telecom companies to fleece the consumers.

Senator Abedi said that all the claims made for controlling grey traffic were white lies as officials of FIA were involved in the scam. He said some of the illegal exchanges were operating inside FIA offices. He asked for taking steps against the officials as their corruption was giving bad name to politicians.

Chairman PTA Dr. Muhammad Yasin admitted some of the telecom companies were involved in illegal termination as the taxes were on the higher side. PTA could only monitor 30 percent of the international traffic. He said during the last four years Access Promotion Contribution (APC) has contributed Rs 64 billion. Secretary IT said that out of 9 billion minutes per annum received from abroad 2.5 minutes were unaccounted for every year. It was causing an estimated loss of $ 133 million per annum. Chairman PTA proposed that the APC should be lowered as it was the most suitable mechanism to deal with the grey tariff.

Senator Abedi said that USF was being managed by an illegally appointed Chief Executive Officer who was involved in Rs 4 billion scam. He said that he had submitted proofs to the committee and no action was taken. He warned that if no action was taken he would approach the President to take action against corrupt practices in MoIT. He said that the board of directors of USF consisted of contractors who share among themselves all projects.

Senator Abedi said PTA had failed to take any action against Mobilink on the large number of consumer complaints on over billing. He asked for summoning senior officials of the company to reprimand them for their mal practices. Senator Zahid Khan complained that the company had not compensated consumers for two days outages earlier this year. However, Chairman PTA claimed that the company had already paid the compensation. Senator Abedi said PTA was facilitating the telecom companies to fleece the consumers. He said officials were threatening poor consumers for sending SMS while they had no mechanism to control bulk SMS send by banned Hizbat Tahrir or Taliban.

Chairman asked MoIT and PTA to reply to all the queries raised by the Senators. However, they sought time. Chairman PTA wanted committee to meet again after Eid-ul-Fitr as he had to perform Umra. However, Senators opposed his demand and said that there were enough days left in Ramadan and he could proceed later on. They said that if an urgent meeting was not convened then all their effort would go wasted. The committee decided to hold next meeting on August 23.