By: admin
In: Telecom
With: 42 Comments

The government of Pakistan’s target of raising Rs75 billion through the issuance of 3G licenses remains a far-fetched idea as the interest of telecom operators in Pakistan with regards to increasing capital expenditure remains subdued, said Sana Bawani, an analyst at BMA Research.

Down reported that the govnment had planned to auction three G licence as soon as possible. Finance minister  Dr Abdul Hafeez Shaikh presided meeting and decided to sent summary to cabinate.

The News reported that  Low Average Revenue per User (ARPU) ($2.53 as of Dec 2010 and $2.48 as of Jun 2010) is not encouraging for telecom companies to introduce 3G in Pakistan which entails a large capital expenditure and targets a high value-added segment of the market, she said.

Currently, cellular operators remain keen on aggrandising revenue stream via introduction of cheaper data services and value added services which they expect will result in pushing up the ARPUs, she added.

The auction for 3G licences was to be held in February 2009, but it could not happen. The local telecom operators attribute this delay to the Sale Purchase Agreement of Pakistan Telecommunication Company Ltd with the government, which they say is a hurdle in expanding technology in Pakistan. The agreement was not made public, although PTCL is a government’s asset and is also listed.

Sources in the industry said that Saeed Ahmed Khan, Secretary IT, said that 3G would be launched soon. All the groundwork for 3G has been done, he said.

The proposal has already been sent to the cabinet for approval and it is expected that within two weeks it will approve and 3G will be launched soon, he said.

A PTA official said that the set target was an estimation cost of 3G licences depending on various factors like population, GDP and sales price of 2G. The actual cost would be determined from the auction of the 3G spectrum where the applicants for the 3G spectrum will be allowed to openly bid and participate in an open and transparent auctioning process, he said. It will also depend on the market forces, he said.

PTA being the regulator is awaiting a decision from the government to decide on spectrum auction, he said. The government is taking various factors into consideration which include feedback from all stakeholders.

PTA licensing regime is technology neutral and operators can launch 3G or 4G depending on their business need, he said.

PTA claimed that the 3G services will assist in raising the ARPU. The mobile operators are already experiencing positive uplift in ARPUs which is the case in various developing countries where ARPUs were comparatively low, however, with the launch of 3G ARPUs increased, said the PTA official.

He added that telecom infrastructure is already in place in the country, which will help reduce capital expenditure associated with 3G deployment in the country.

The PTA official said that there is a sizeable amount of 3G-ready handsets being used by the educated and affluent segment.

This segment is approximately 7-10 percent of our total population, but in absolute terms it may be larger than the total of population of some of the countries where 3G services are available, he claimed.

The PTA official said that several seminars and conferences have been conducted as part of the 3G market awareness campaign. Long consultations with the market players have also been taking place in connection with 3G introduction.

PTA has also completed other requirements of 3G launch such as availability of spectrum. Based on the strong consultations, operators have now shown interest to get 3G spectrum, he said.

It is the government that has to decide when and how to launch 3G.

Cellular operators, however, said that in Pakistan’s current situation the dream of 3G may not become a reality for sometime. “This is not because the technology or resources are not available,” said a source.

Mobile phone service companies face several challenges at present with their current networks including heavy taxation, import duties, Average Revenue Per User (ARPU) amongst the lowest in the world and low tele-density in rural and remote areas of the country, he said.

But if the 3G licences are auctioned, all operators will have to opt for it as there will be no other choice. Those who do not go for 3G will fail to compete in the market, he said.

However initial reports shows that even 3G in India are underperforming and telecom industry is now gearing up to roll out a range of 3G enabled services and recover the huge investment made in spectrum acquisition, he said.

Telecom sector in India is not sure yet whether they will be able to recover the huge investment, Ansari added. 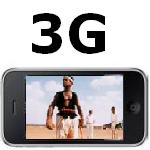