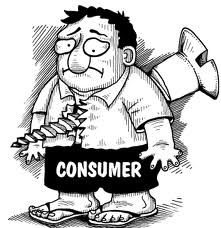 **IHC, as alleged, was the brain child of Rehman Malik who had mobile business in UK.

**International incoming call rates were rase up to 450%

In our beloved Pakistan our politicians, rulers and bureaucracy hand-in-glove due to their deep lasting love and kindness for the masses keep creating welfare schemes in the name of public and for the public. Though from the face such schemes look very attractive but practically inner undisclosed goals are always contrary. For an example about 15 years back PIA introduced a cheap weekly Dubai Karachi flight in the name of love for Overseas Pakistanis. It was very cheap with a condition that the passengers would not carry any hold baggage except for the normally allowed 5-7 kgs hand carry. Though, thus, the flight from Dubai to Karachi should had no baggage weight yet the UAE CAA record showed it always took off with full load. This weight used to be of commercial khapias. When after 8-10 months whispers started rrising how some specific passengers were coming every week, some particular customs officials remained on duty that particular evening the flight was stopped to open some new scheme.

Effective 01 October 2011 an International Clearing House (ICH) was established in Islamabad by the Government fooling the nation it would monitor and control illegal grey traffic of incoming international calls. This IHC, as the press then alleged, was the brain child of Rehman Malik who had mobile technology business in UK. From that day international incoming call rates were jacked up to 450%. For example from Bahrain, Indians call their families in India @ 12 fils a minute costs we the Pakistan now at 38 to 40 Fils a minute. Pre-ICL this rate was 18 Fils a day. Overseas Pakistanis all over the world cried, their Associations and representative bodies cried but no one listened. Leaders from both PPP and PML-N visiting abroad always promised to reduce the rates but as usual all these remained words of mouth to be forgotten. Punjab Governor who himself had been an Overseas Pakistani raised his voice with more volume but time proved it was without any real intent. To my memories a case also came before Lahore High Court. What happened? Nothing because rates never changed.

Official vested interests and beneficiaries including our Kamran Khan vehemently on and on through talk shows tried to convince the public that due to this ICH the country had earned huge foreign exchange while the critics argued the ICH totally failed in reducing grey traffic. According to these critics the “total number of minutes” through grey traffic started increasing. The Competitive Commission of Pakistan at the very beginning in its very lengthy researched Decision termed the ICH a Cartel of 10-12 service providers including PTCL.

It is generally said that unless the rulers and their families themselves ride public buses, send their children to government schools, get treatment from civil hospitals nothing whatsoever would practically ever change. According to press reports recently the family of Nawaz Sharif suffered from this grey traffic when, as is usual, he took a serious note of it and ordered to investigate. Now IHC has been de-established.

It is a tradition that the prices once increased in our beloved country never come down to original level. East Pakistan Flood Tax of Rs. 1/- per gallon was levied in 1970 we still are paying that. It is now three months IHC de-established but the ICH levy/tax IHC has not been withdrawn to bring the rates at pre-ICH. New levies or taxes are made effectively immediately even sometime retrospectively but withdrawal gets as slow pace as could be possible. Nawaz Sharif family suffered due to grey traffic so that part was properly tackled. Call rate since does not effect his family hence that was ignored. By the way though ICH has been de-established a million worth question is that income still coming through now not withdrawn ICH tax, where is that going? Still to those whom CCP termed as cartel or it would be “disclosed” by some  after some “years” from now.

2014-08-06
Previous Post: Telenor Zong bringing international call without ICH
Next Post: Laptop is not a leisure but a necessity item these days. Ahsan Iqbal